A Guide to Sainte Anne Marine Park in the Seychelles 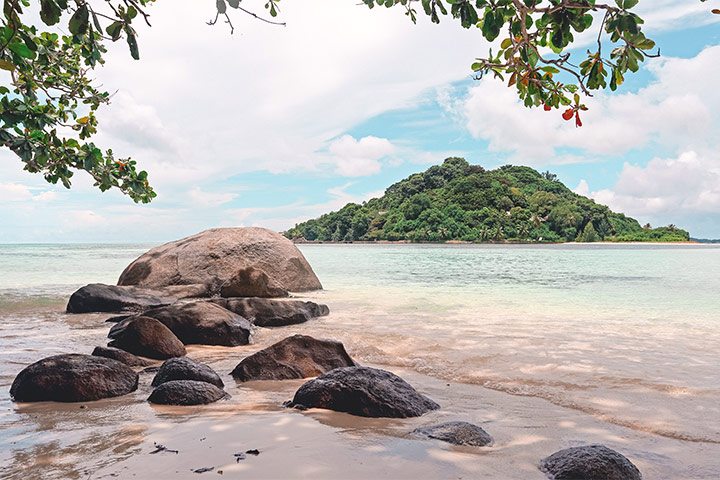 Just 5km off the north-west coast of Mahé you will find the St. Anne Marine National Park, which is comprised of five islands: Moyenne, Round, Long, Cerf, and the biggest one, Sainte Anne. It also encompasses three uninhabited islets: Cachée Island, Sèche Island (Beacon Island), and Harrison Rock (Grand Rocher). Established in 1973, it is the oldest Marine Reserve in Seychelles and the first of its kind in the Indian Ocean. In this protected area, you can spend a whole day island hopping, swimming, or just lazing on one of the islands’ lovely beaches.

However, the main attractions here are the superb snorkeling sites.

Set amid dazzling turquoise waters, the Park is a heaven for snorkeling and diving, with the best points being located between the islands of Sainte Anne and Moyenne. Here you will enjoy colorful coral reefs, bottlenose dolphins, and hawksbill turtles, and since the Park contains some of the largest seagrass meadows in the granitic islands, you may also see green turtles feeding on them.

Once in Mahé, you can organize a day trip or a boat tour to the Marine Park through either a local tour operator in Victoria and Beau Vallon or your accommodation. The boat ride offers spectacular views of the surrounding islands, while a glass-bottom boat ride introduces the visitors to the treasures of this pristine Marine Protected Area. However, if you want to visit just the island of Sainte Anne, there is a regular ferry service that takes you there from the Port of Victoria in just 20min.

| Pricing: All non-residents have to pay 200 SCR (15€) for the landing fee, plus the cost of the boat ride. If you book a tour, the landing fee, snorkeling activities, and barbecue are usually included in the price.

The small island of Sainte Anne, discovered on the day of Saint Anne, was the site of the first French settlement in Seychelles in 1770, offering a reassuring anchorage, away from the reefs and mangroves of Mahé. The island is nowadays occupied by a 5* Resort and offers six ravishing beaches, abundant tropical vegetation, and a perfect hideaway if you are seeking privacy and luxury.

Sainte Anne Island is a favorite nesting ground mainly for hawksbill turtles and occasionally for some green sea turtles. If you are lucky enough, you will spot them laying their eggs (October to January) or even witness the baby turtles making their way towards the ocean for the first time (February to March). During nesting season some beaches are preserved for the egg-laying process, but luckily there are several ones to choose from, so guests and turtles can live in harmony.

The Resort is bordered by three white sand beaches: the big Grande Anse, which is located in the southwest, Anse Royale, where most sea turtles lay their eggs, and Anse Tortues. Anse Cabot, Anse Manon, and Anse Cimitiere are the island’s other beaches and even though they require some effort to get to, they are also worth exploring.

Just a little smaller than Sainte Anne, the granitic Cerf Island possesses only a few accommodation establishments and no paved roads, allowing you to enjoy nature in its purest form.

Surrounded by an enchanting underwater world, it offers superb snorkeling opportunities, especially at Anse Takamaka, where you will find a snorkel trail that guides you to the area’s best underwater sights. Another unique feature of this beach, where the jetty is located, is that during nighttime it is lit up from below and thus turns into an aquarium.

Jungle trails take you through the lush vegetation of the interior of the island to the 108m viewpoint and bring you close to rare plants, giant tortoises, a small fruit bat colony, and even miniature chameleons.

Here the beaches are extremely shallow, less than 1m, and they disappear at high tide. However, at low tide, you can walk around the island along the beach and even visit Ile Cachée, a secluded islet and nesting site for seabirds lying only a few meters southeast of Cerf, by simply wading through the water.

This small, round island, covered in verdant forest, features stunning beaches and coves with memorable swimming. The entire area is open for underwater exploration and the coral between the islands makes it particularly rich in fish and marine life, with shellfish and starfish abounding near the sandy beaches.

Originally used as a leper colony, Round Island is now home to a boutique resort consisting of private villas, each with its own private pool and direct access to the beach. A stroll around the island takes less than 30 minutes.

Once a quarantine station for small-pox sailors and later a juvenile prison, Long is a coconut palm-covered island that features powder-soft beaches and turquoise water.

Moyenne is a man’s bid to create his very own paradise.

In 1962, the former UK newspaper editor Brendon Grimshaw purchased the long uninhabited island for £8.000 and settled there as its only full-time inhabitant. He planted 16.000 trees, built 4.8km of nature paths, and set up a breeding program for Aldabra giant tortoises. Together with a friend, they operated the island as a nature reserve, charging day visitors for the privilege of coming ashore, dining at the Jolly Roger Bar, and relaxing on the beach.

A conservation sanctuary for more than 100 wild tortoises that roam freely, Moyenne island is nowadays a National Park in its own right, separate to that of the Sainte Anne Marine Park. Two white-sand beaches surrounded by huge granite boulders, pirates’ graves, and 45min of nature paths that wind in and out of the island’s lush vegetation is what you will find on this lovely island.

Visiting Sainte Anne Marine Park is definitely a unique experience, especially for those seeking enchanting snorkeling spots. And if you are willing to splurge a little, the luxury resorts on the islands within the national park itself make fabulous escapist alternatives to staying on the mainland.