Home » Seychelles » A Guide to Curieuse Island in the Seychelles

A Guide to Curieuse Island in the Seychelles 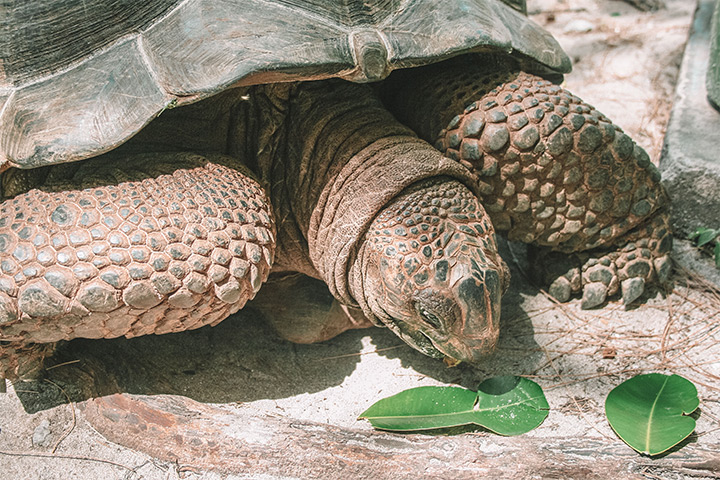 Originally named Ile Rouge for its fiery-red soil, Curieuse is situated close to the northern coast of Praslin, covering an area of only 2.9km2. In 1768, French explorer, Marc-Joseph Marion du Fresne, colonized the island and renamed it after his ship “La Curieuse”. A leper colony from 1829 until 1965, it is now a designated Marine National Park, used as a breeding center for Giant Aldabra tortoises and carrying out several coral restoration projects.

From mangrove swamps leading to gorgeous beaches and ruins of a leprosarium to giant tortoises roaming freely around, here is how to explore this peppered with coco-de-mer trees island on a day trip.

How to Get to Curieuse

Once on Praslin, you can arrange an organized tour to Curieuse and St Pierre through your accommodation or local tour operators. The basic tour usually includes hotel pick-up and drop-off, a guided tour of Curieuse Island, and snorkeling the reef off the tiny island of St. Pierre. Half-day trips start from 65€ and the price goes up if you opt for a BBQ lunch or a full-day trip. Before booking your tour make sure that landing and entry fees for the islands are included in the price.

Alternatively, you can charter your own boat from Anse Volbert (Cote’ D’or) or Anse Possession on Praslin. In this case, you also have to arrange your pick up and pay for the landing fees, which are currently SCR 300 (»20€) for Curieuse and St Pierre. Sagittarius Taxi Boat charges about 60€ for the drop-off at Curieuse. Organized day tours are also available from La Digue island, but the prices will be higher.

Tip: If you opt for an island-hopping tour, make sure to include in the itinerary a trip to Cousin Island, which is a safe refuge for countless birds!

Despite the fact that fire and erosion over many years have destroyed much of the vegetation on Curieuse, the island has rich endemic flora and fauna.

First and foremost, it is home to one of the two natural forests of the Coco de Mer palm tree, the other one being Valle de Mai on Praslin. Coco de Mer produces the largest and heaviest seeds in the world, with the suggestive shape of its seed earning it plenty of attention. Then, swarming around the iconic palm tree are Curieuse’s seemingly endless thick and rich mangroves. The mangrove forest supports six of the seven native mangrove species known in Seychelles and provides an important habitat for many species of animals.

The most noticeable presence on Curieuse, however, is the 300 strong colony of Aldabra giant tortoises roaming freely. They were introduced here between 1975 and 1982 as part of a conservation program aiming to preserve their numbers in a natural, wild environment, and to provide an opportunity to study this unique species. And if giant tortoises are not enough, the island is regularly visited by nesting sea turtles, which return each year to lay their eggs on Curieuse beaches. Last but not least, the Seychelles Black Parrot, one of the rarest endemic bird species and the national bird of the Seychelles, occurs only on Curieuse and Praslin though it breeds on the latter.

Tip: In order to discover Curieuse’s rare flora and fauna, follow the island’s guided trails, visit the Giant Tortoise Farm, or opt in for a snorkeling trip!

What to See on Curieuse

Giant tortoises, roaming around the Ranger’s Station at the Laraie Bay, is the first you will see as you set foot on Curieuse. The island hosts the second largest population of giant tortoises in the Seychelles, after the Aldabra World Heritage Site. It was in 1975 that 95 individuals were brought here from Aldabra in an attempt to protect this special creature from the fate of extinction and their number has greatly increased ever since. In the tortoise nursery, the giant tortoises are nurtured until they are five years old, and then they are released into the wild.

The wardens of the farm will show you around the pens, after which you’re free to explore the rest of the island.

From 1829 to 1965, Curieuse was used as a leper colony, with the first inmates being African slaves who had been abandoned on various isolated islands in the Indian Ocean. The most striking reminders of the Curieuse leper colony are the ruins of the stone cottages and shelters along the shore at Anse St José. Camouflaged on the edge of the tree-line, these wobbly-looking buildings with their strong stonework and their crooked doors and windows, boast an enchanting charm and quaintness.

Another significant reminder is the Doctor’s House, a wonder of Creole colonial architecture. Built in 1873 as the residence of the Scottish Medical Officer in charge Dr. William MacGregor, the single storey building is now being used as an educational center and a museum. It provides extensive information about the island’s long and sometimes sad history, while it also depicts the natural beauty of the island through the artwork of local artists.

A paradise for hiking enthusiasts, Curieuse is full of natural treasures and the best way to discover them is by following its two marked trails. From Baie Laraie, where the boat from Praslin usually drops you off, a path passes by the Giant Tortoise Farm, and after crossing a rocky area it leads to a mangrove forest. There, you will find yourself at a crossroads: taking a right you will get to Anse Badamier beach, in the north of the island, while the path to your right takes you to the beautiful Anse St. José beach.

The hike to Anse Badamier is on a small hill and takes about 45min. Here, red earth intermingles with the green foliage and the black granite boulders, and the result is a feast of colors. The beach itself, with calm turquoise waters, palm trees, and granite boulders scattered in the sea, is considered to be among the most beautiful in the Seychelles.

On your way to Anse St José you will pass through a dense mangrove forest, where a wooden boardwalk built on piling allows visitors to access the swamp even at high tide. As you approach the beach, you will see the ruins of the leper colony, now well blended into the landscape, and the Doctor’s House.

From Anse St. José you can also follow a challenging rocky trail to the top of the island, from where the views are spectacular.

Be prepared, however, for some scratches and scrapes as there is no clear path. You may even need a large stick to beat away the green blankets of hot, wet growth to find your way. But the 360-degree view from the top of Mount Caiman, Curieuse’s highest point, is worth the sweat, stickiness, and sores from the grueling, off-road climb.

No visit to the island is complete without admiring its wonderful underwater world. Curieuse, as a National Marine Park, takes care of the restoration of the coral reefs and offers in its eastern unique places for diving. Snorkeling at the so-called Coral Garden (Pointe Rouge) will ensure an encounter with several spectacular marine species – including sea turtles if you are lucky.

Another excellent place to go snorkeling is the islet of Saint Pierre, located a 15min boat ride from Curieuse and 5min from Praslin. This tiny islet of barely 0.1km2 features a few granite rocks, lapped by the wave, a handful of palm trees swaying in the wind, and white-tailed tropical birds flying around it. The glassy waters around the islet, although sometimes a little turbulent, are excellent for swimming and snorkeling.

Whether you are a snorkeling enthusiast, a hiking lover, a giant tortoise admirer or just keen on exploring the island’s intriguing biodiversity, Curieuse will not let you down. So, grab your camera and snorkeling equipment – or hiking shoes – and be next on the boat to this unique island!