10 Best Places to Visit in Austria 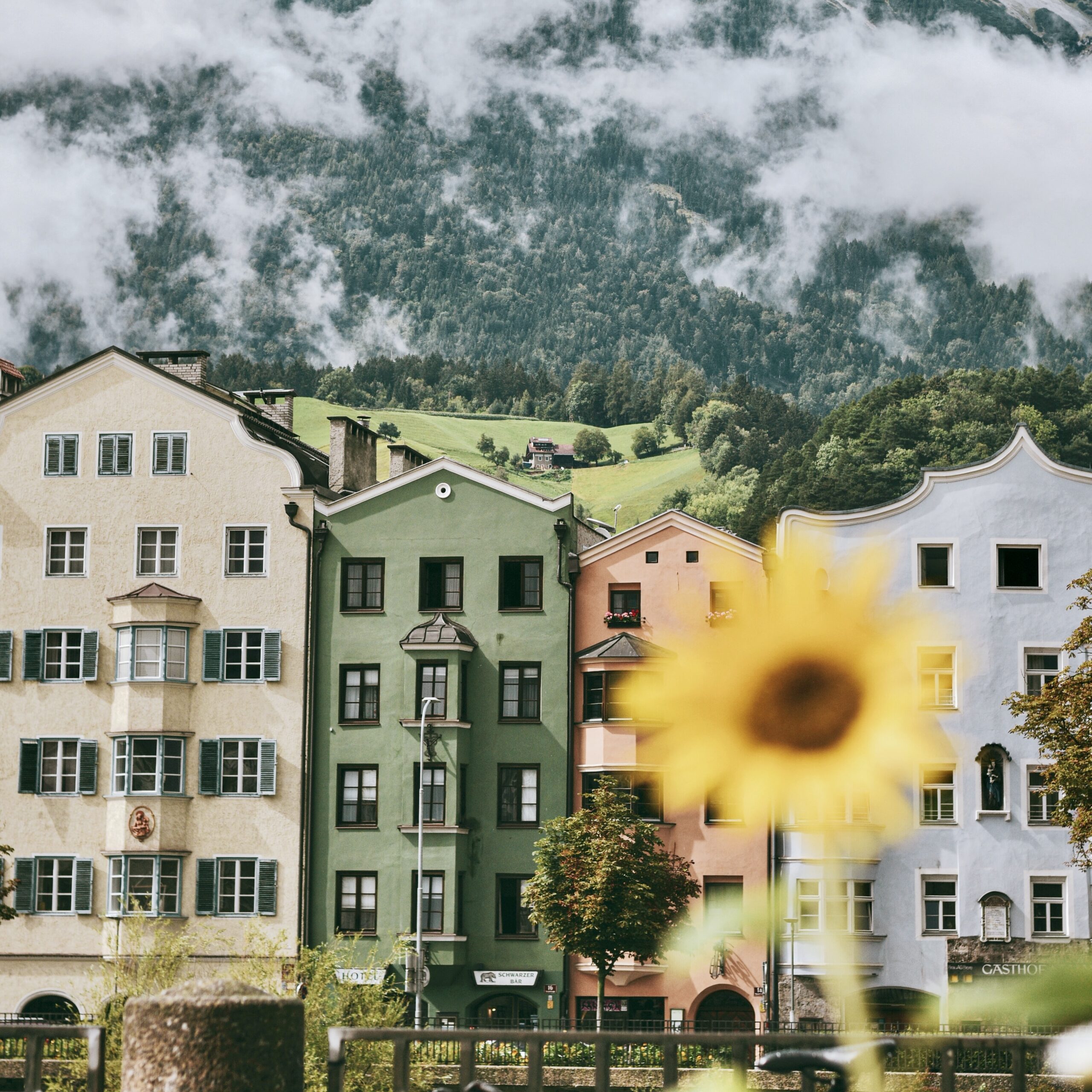 Since we’ve been calling Innsbruck home for years, we couldn’t help but put it at the top of our list. But not without a good reason!

Set against the majestic backdrop of the snow-covered Alps and traversed by the soothing Inn river Tyrol’s capital is a sight to behold. It is the kind of place where, at one moment, you are taking in its galleries, museums, and upbeat nightlife, and the next, making your way to a mountain hut or heading out for the ski pistes.

Stroll the lanes of the historic Old Town (Altstadt), admire the Goldenes Dachl, Innsbruck’s most distinctive landmark, and visit the Tirol Panorama or the Landesmuseum. Then whizz up into the Alps inside Zaha Hadid’s futuristic Nordkette funicular and enjoy the views from the 2,300m-high Hafelekar peak.

And if it happens to be there during winter, make sure you visit most of its Christmas markets scattered around the city!

Base yourself on the chocolate-box alpine village of Heiligenblut, and drive or journey by bus along the 48km Grossglockner High Alpine Road, regarded as one of Europe’s most beautiful mountain routes.
On the northern side of the park, visit the Krimmler Waterfalls, the highest in Austria, with a total height of 380m. Or follow the Pinzgauer Spaziergang, a scenic 7km hiking trail starting from the lakeside resort of Zell am See.

Starting from Fuschlsee, climb the Drachenwand via ferrata in Mondsee, hike in the Höllengebirge between Attersee and Traunsee, and explore Austria’s largest still-operating mine in Alttaussee.

On the northern shore of the charming Wolfgangsee, stands the picturesque village of St. Wolfgang, perched at the foot of the 1.785m Schafberg. Get to the top of the mountain, either by hiking or by taking the old-fashioned rack and pinion railway, or take the ferry to the villages of St Gilgen and Strobl.

Last but not least, there is the spectacular Hallstätter See, lying at the foot of the mighty Dachstein Massif and the world-famous Hallstatt. Take a leisurely stroll in its old town, check out the nearby Salt Mines, or take the cable car to the Dachstein Caves and the breathtaking 5Fingers viewing platform.

Salzburg is a celebrity for those who have never even set foot in the city, thanks to its most famous son, Mozart, and its star appearance in The Sound of Music.

Fine-tune your own tour of the film locations or explore at your own pace its baroque Altstadt and the splendid Hellbrunn and Mirabell palaces. Then sway up to its glorious fortress, Festung Hohensalzburg, beckoning on a forested peak above the city.

Should you find yourself there from late July to August, catch an opera, a theatre performance, or a concert during the Salzburg Festival, the outstanding event in the city’s musical calendar. And if you have an extra day or two, the Salt Mines and Celtic Museum at Hallein and the ice caves (Eisriesenwelt) and castle (Festung Hohenwerfen) at Werfen make excellent day trips.

The dramatic stretch of river between Krems an der Donau and Melk, known as the Wachau, is Austria’s most scenic section of the Danube. Granted UNESCO World Heritage status for its harmonious blend of natural and cultural beauty, the Wachau is dominated by wine-producing villages, forested slopes, formidable fortresses, and imposing castles at nearly every bend.

From Krems, the atmospheric medieval town at Danube’s eastern end, the river cuts its way through steep, vine-clad hills, emerging some 40km later at Melk, whose cliff-top monastery is probably the most spectacularly sited abbey in all Austria.

To properly explore the valley’s in-between wine-producing villages and castles, charter a boat or rent a bike and follow the wonderfully flat cycle path running along both sides of the Danube between Krems and Melk.

Wachau Valley makes for a great getaway from Vienna, and you can even visit it as a day trip by joining a cruise or a biking tour!

A steam train that chugs through the broad valley and festivals that mark the beginning of the agricultural year (Gauderfest) or the return of the cows from the alpine pastures (Almabtrieb) are just a few of the unique experiences that Zillertal offers.

Not sure where to start from?

For serious skiing, the tourist town of Mayrhofen provides easy access to the Harakiri, Austria’s steepest piste, and the popular Hintertux Glacier, where snow is guaranteed year-round.

For excellent hiking, base yourself in the adorable village of Ginzling, from where a toll road snakes up the valley to the Schlegeisspeicher reservoir, the trailhead for the stunning 11km Zillertal Circuit.

And for a highly scenic drive, the rural village of Zell am Ziller is the start of the 12km Gerlos Alpine Road, which links the Zillertal to the Krimml Waterfall in the Hohe Tauern NP.

Graz, the photogenic and fabulously relaxed capital of Styria, is one of Austria’s most beautiful sites. Some of its highlights include climbing to the peak of Schlossberg, strolling around the old town (Altstadt), and soaking in the culture at the fine-art collections of the Landesmuseum Joanneum and the Baroque Eggenberg Palace.

Plus, it is also a good base from which to venture out into the vineyards and pumpkin fields of the rural southeast.

There, south of Graz and touching on the Slovenian border, the South Styrian Wine Route is a treat to the tastebuds as well as to the eyes. The 25km route spans from Ehrenhausen to Leutschach, wending its way through rolling, verdant hills and picturesque vineyards, all with the happy bonus of the “Buschenschänken”. These are traditional wine taverns, where the owner/winemaker sells only their own wines along with local cold dishes. Thus, a perfect way of getting an authentic taste of traditional life in Styria!

Klagenfurt, the provincial capital of Carinthia, is a vibrant and sunny city with a compact Inner Stadt that provides a good base for exploring the surrounding area. Its main claim to fame is its position on the eastern shores of Wörthersee, the most famous of the region’s 1270 pristine mountain lakes. Here, you can experience Rivera chic, Carinthian style, with a trip around the lake that takes you past the genteel resort of Pörtschach, the nightlife hub of Velden, and the small town of Maria Wörth.

Close at hand is the stunning Disney-esque Hochosterwitz castle, draping itself around the slopes of a hill, with 14 gate towers on the path up to the final bastion. Further north lie the former ecclesiastical capital of Gurk, famed for its splendid Romanesque cathedral and the charming medieval town of Friesach.

Once a year, Friesach locks its gates and gets lit by torches and flares for the annual Spectaculum festival. There, you will stroll around among jesters, armoured knights, and princesses and enjoy medieval meals from street stalls paid for with Friesach pennies.

For a taste of Tibet and the chance to meditate whilst walking a Lingkor, visit the Heinrich Harrer Museum in Hüttenberg. The birthplace of Harrer, who famously spent seven years in Tibet and was immortalised by Brad Pitt in film, hosts in its museum a huge collection of objects and photographs Harrer brought back from his world travels.

Nudging up against Germany, Switzerland, and Liechtenstein and some 600km away from Vienna, the province of Vorarlberg has always led a life slightly separate from the rest of the country. And still today, this remarkably peaceful and deeply traditional corner of the country remains gloriously off the radar.

Its capital, Bregenz, lies in a romantic spot on the eastern shores of Bodensee (Lake Constance). The lakeside town is the area’s cultural center, with the famous Bregenz Festival taking place on a floating stage right on the lake. To the south, the bucolic villages of the Bregenzerwald are best explored on the Käsestrasse (Cheese Road), stopping en route for buttermilk and mildly tangy Bergkäse in a local Sennerei.

Other towns that merit a visit are Feldkirch, with its medieval old town, and Bludenz, permeated by chocolate smells from the Suchard factory, producers of the famous Milka. The serpentine 23km Silvretta Hochalpenstrasse is another spectacular drive that starts from Partenen and, snaking through lofty peaks, rises to over 2500m on the way over the Tyrolean border.